Elijah all dressed up

Back in October I wrote about some of the amazing Elijah modifications floating about on Ravelry, and finally, just before my own little one was born in February, I managed to knit a special elephant just for her.  It was the fifth I’ve made, and the only one I’ve kept!

I went with a combination of a couple of ideas — the garter stitch ‘neckband’ and ‘cuffs’, and a little stripey sweater.  It was straightforward to do, simply alternating the two colours every two rounds once I got past the garter stitch.  One technique I did use though, was tech knitter’sjogless stripes tutorial.  She describes a couple of different ways to make the colour changes invisible, I used the travelling method so the start of the round begins at the back his sweater and moved a few stitches to the left.  I picked up stitches for the arms a few rows further down the body than the patterns shows, but just so that the sleeve came out of the sweater body and not the neckband! 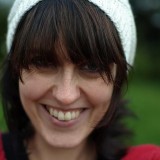 bind-off finishing seaming tutorial
Kitchener stitch is a knitting technique used for grafting together two sets of live stitches, most often stockinette stitch. Instead of binding off and sewing two edges together, you can use a tapestry needle and yarn to join the stitches completely seamlessly.
Read More

cast-on tutorial
The crochet provisional cast-on is easy to work and unzips perfectly every time! A provisional cast-on can be used anytime you want to pick up live stitches from your cast-on edge, either to knit in the opposite direction from or to create a seamless kitchener stitch join.
Read More