Springtime at the Fair

I fell in love with Mary Jane’s cardigan Jenny at the Fair when I helped out with the photoshoot for The Rhinebeck Sweater in 2012, and the photo below has been on the wall above my desk since last summer — I love the light in the picture. Before going to Rhinebeck this past October I made two of the cardigans from the book, a Pumpkin Ale and a handspun Sugarleaf Cardigan, but I still had plans to make a few more of the sweaters from the book. 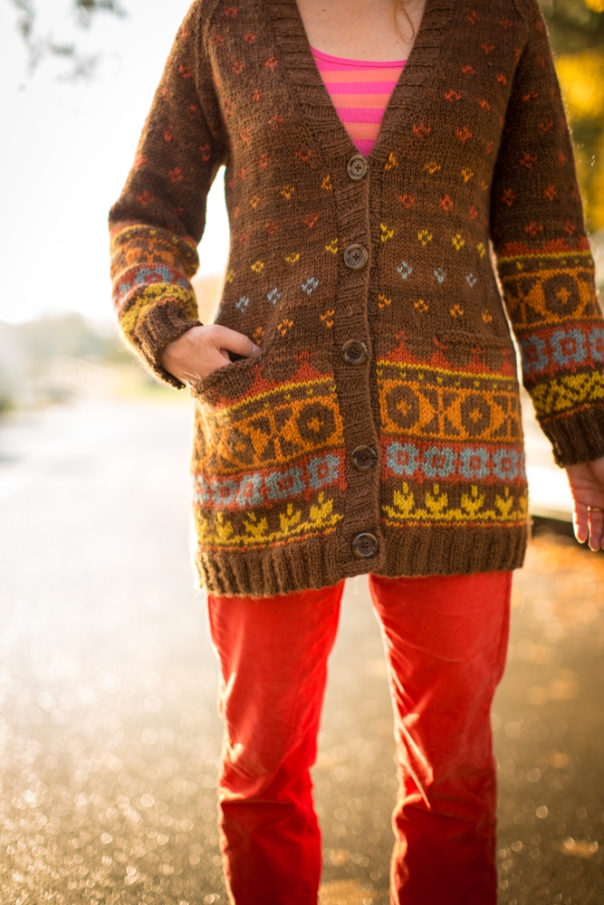 High on the list was Jenny at the Fair and I knew I wanted to make my version out of the Nash Island Light from Starcroft Fibers that Mary Jane used, it’s pretty special. I think the Starcroft Fiber, Nash Island essay is one of my favourites from the book and I love that this sweater and yarn has so much history.

I didn’t quite manage to get my act together in time to have Jani the owner of Starcroft Fiber bring the yarn to Rhinebeck for me this past October — as we were too busy getting all the last minute things together for the book and then travelling to the US. But I did talk to Jani at Rhinebeck about the yarn and colours for my version. I absolutely love the colours in the original, but decided to go for something completely different. Given that there are only 16 colours in the range I think it’s pretty cool how different the two versions look. It sounds like there are going be be eight more colours later this year.

I gave Jani two colours that I liked for the main colour, Cove and Buoy, and four colours for the contrasts: Urchin, Whelk, Anenome and Clear Skies. But since Jani is the colour master I gave her free reign to change any of the contrast colours if she felt that something else would be a better choice. I tried to arrange having the yarn sent to a friend’s place in the US before I left but that just didn’t work out. A few months passed, I spent some of that time working on my Aunt Fred  (I’ll cover that sweater in another post) and I put knitting Jenny at the Fair to the back of my mind.  Then, near the end of January I got one of those emails that makes your day: ‘Hello Rebecca, I have your yarn ready!’ When the box of yarn finally arrived in Scotland I was super excited to open it as I had no idea what colours Jani had sent! 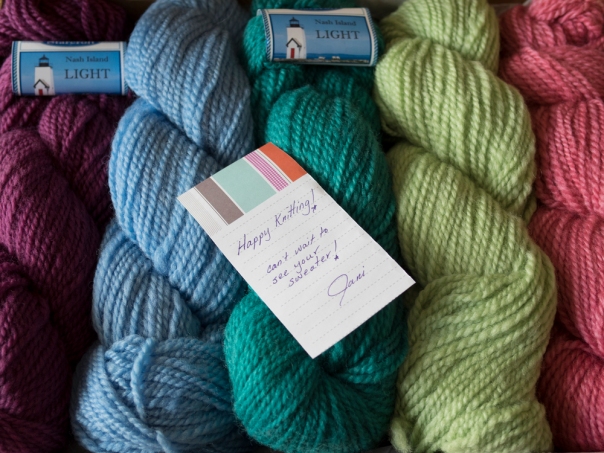 I love what I received, six skeins of Buoy and one each of Urchin, Whelk, Anemone and Clear Skies, along with a cute note included in the box! I took the photos above the next  morning and then started winding yarn. I soon realised that I had enough of each of the contrast colours that I’d be able them in any order — too many choices! I swatched to see if that would help me decide, but nope, I still had no idea what order to use the contrast colours in.

Then I remembered I’d used my large sketch pad and pencil crayons to help me plan out the stripe order for my Benton and figured it work for this as well. So I roughly drew out an outline of the main chart and then coloured it in a few different ways. Turns out I liked the first version I coloured in the best, and it was the one I ended up going with. 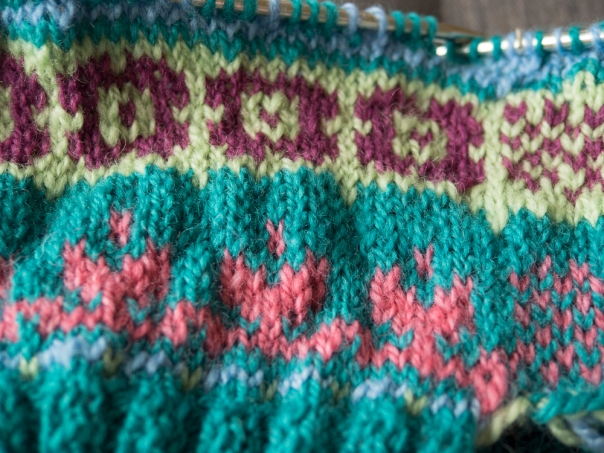 When I knit tops I normally add in bust darts, but because of the cut and oversized style of this cardigan I decided against it. I did have a quick chat with Ysolda about it (one of the perks of working for a designer who has written a book about fitting sweaters!) And she agreed bust darts weren’t really necessary for this sweater.

The one modification I did do was to knit the sleeves from the size smaller, I’m not a fan of big dangly cuffs — they drive me crazy. So I went with the 43 1/2 inch size for the body of the sweater and the 40 inch size for the sleeves. The knitting of the sweater went pretty quickly and I think it only took be two weeks to finish it after I got the yarn. The sweater I’m knitting now seems like it’s going so slowly and the needles feel tiny! But that’s not surprising when you go from knitting on 5.5mm needles to working on 2.75mm needles.

After steeking my cardigan I still needed to choose buttons. It’s a pretty big sweater to cart around looking for buttons so I only took the swatch with me to John Lewis and found some awesome pink buttons.

Then I started wearing my Springtime at the Fair everywhere, the only issue I have is it’s too long for all my spring coats. It looks a bit funny sticking out the bottom of my rain jacket, but a waterproof of some kind is normally a requirement in Scotland so I can deal with a slightly strange outfit if it means I can wear my cardigan.

Oh and I decided springtime was also a good time to get my hair cut shorter again.  And don’t worry I didn’t actually ride my bike on the pavement, but I didn’t want to get hit by a car standing in the street. 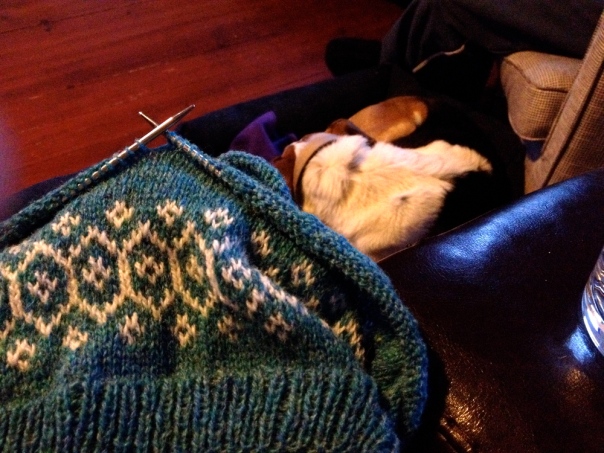 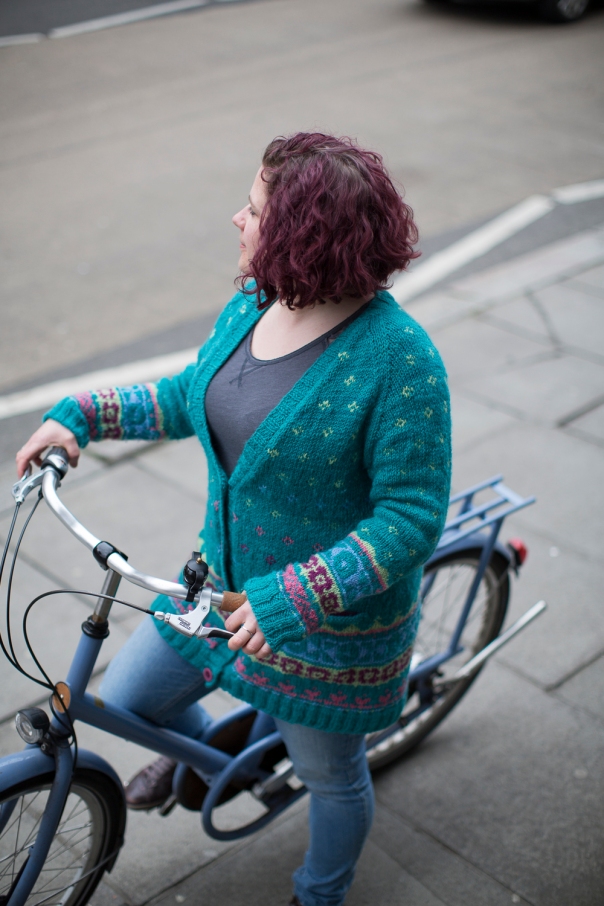